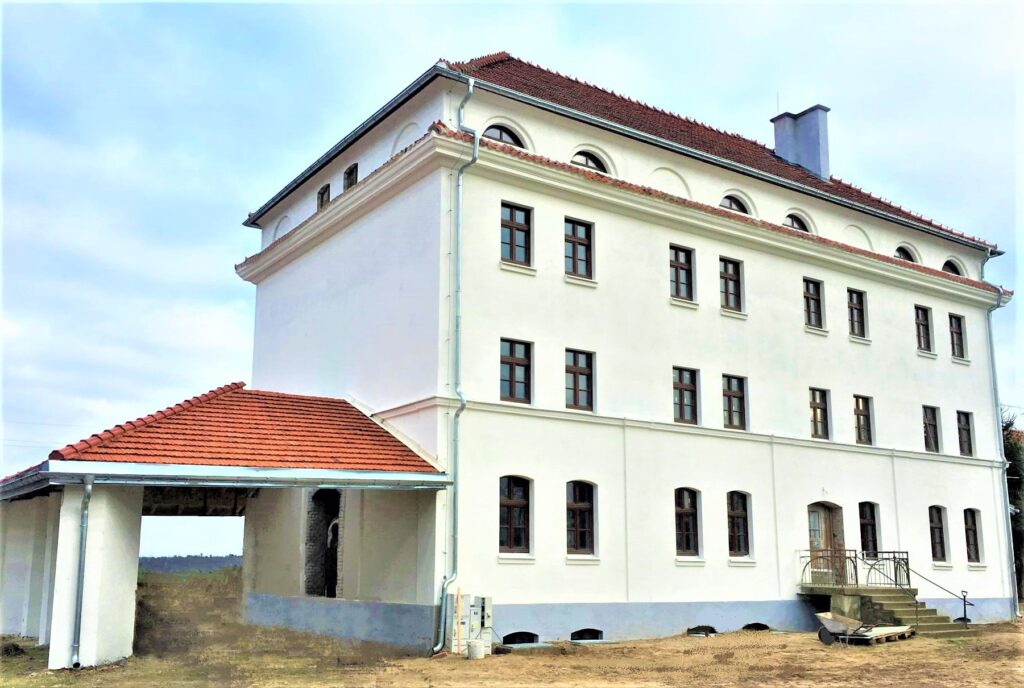 The magnificent three-storey building of the 19th century grain mill of Bruno Plüguett, with the mill equipment from the 18th century preserved in perfect condition, was extensively renovated and refurbished in 2021 with funds from the Interreg V-A Lithuania-Poland Cooperation Programme 2014-2020 and opened to the public. Four educational studios in the mill: “Granary of Masurian Flavours,” Art Gallery, Old Crafts Workshop, lecture hall equipped with multimedia. The mill offers museum exhibitions, workshops for children and adults, presentations and lectures on folk art. It also participates in the promotion of cultural and culinary heritage in the region and on the Budry – Sakiai route.

Photogallery of the final stage of the mill renovation: 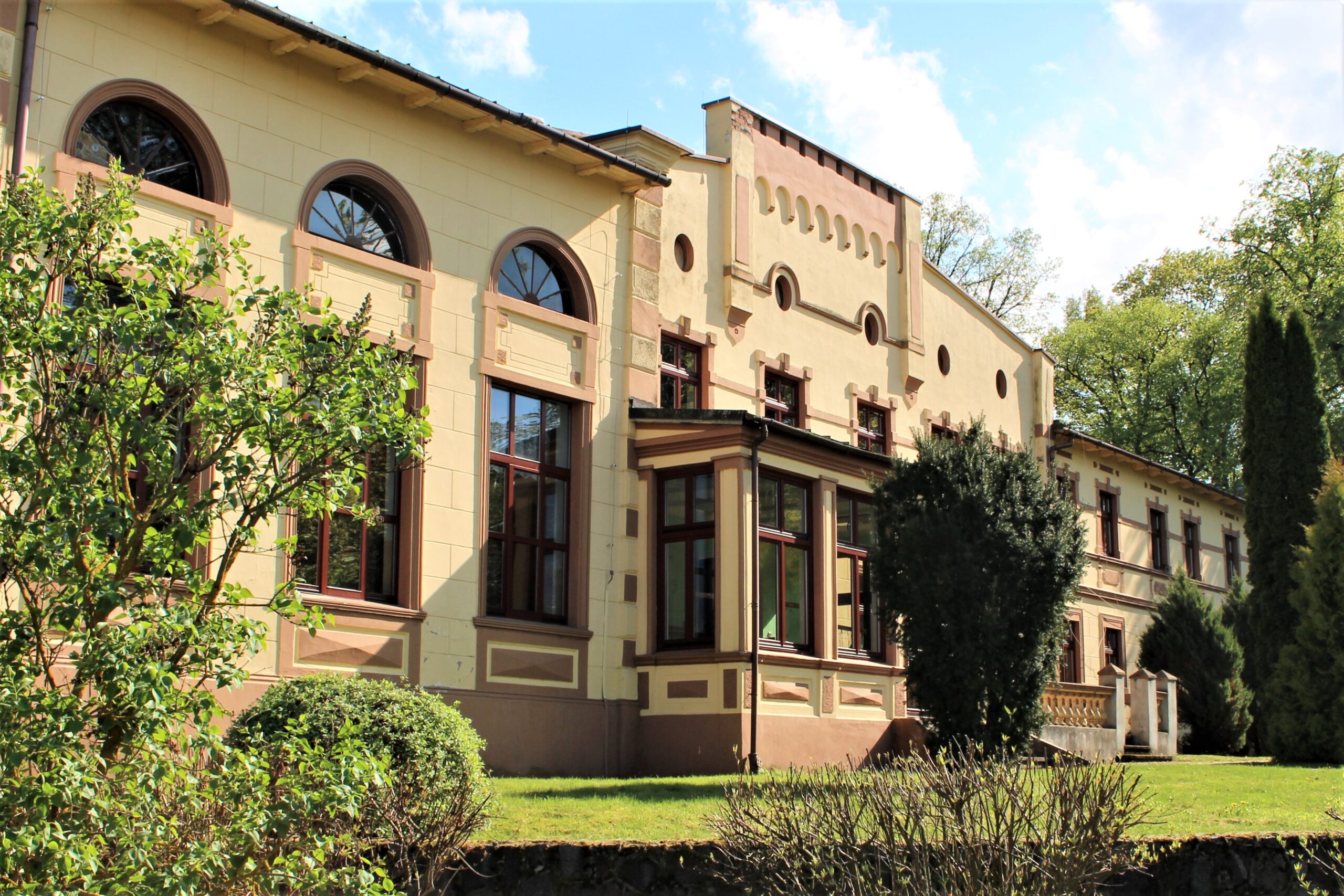 Palace and Park Complex in Więcki

The classicist, 19th century palace and park complex of the Contag family in Więcki dates back to the first half of the 19th century. The palace is a two-storey building with a gabled, almost flat roof. The stable and coach house has been preserved out of the farm yard. The park retains a rich old-growth forest, including monumental examples of ash, oak, maple and beech. Since 1961 the palace has served as a school building. By the road to the village of Dowiaty, there is an old cemetery with family quarters of the Contag family. 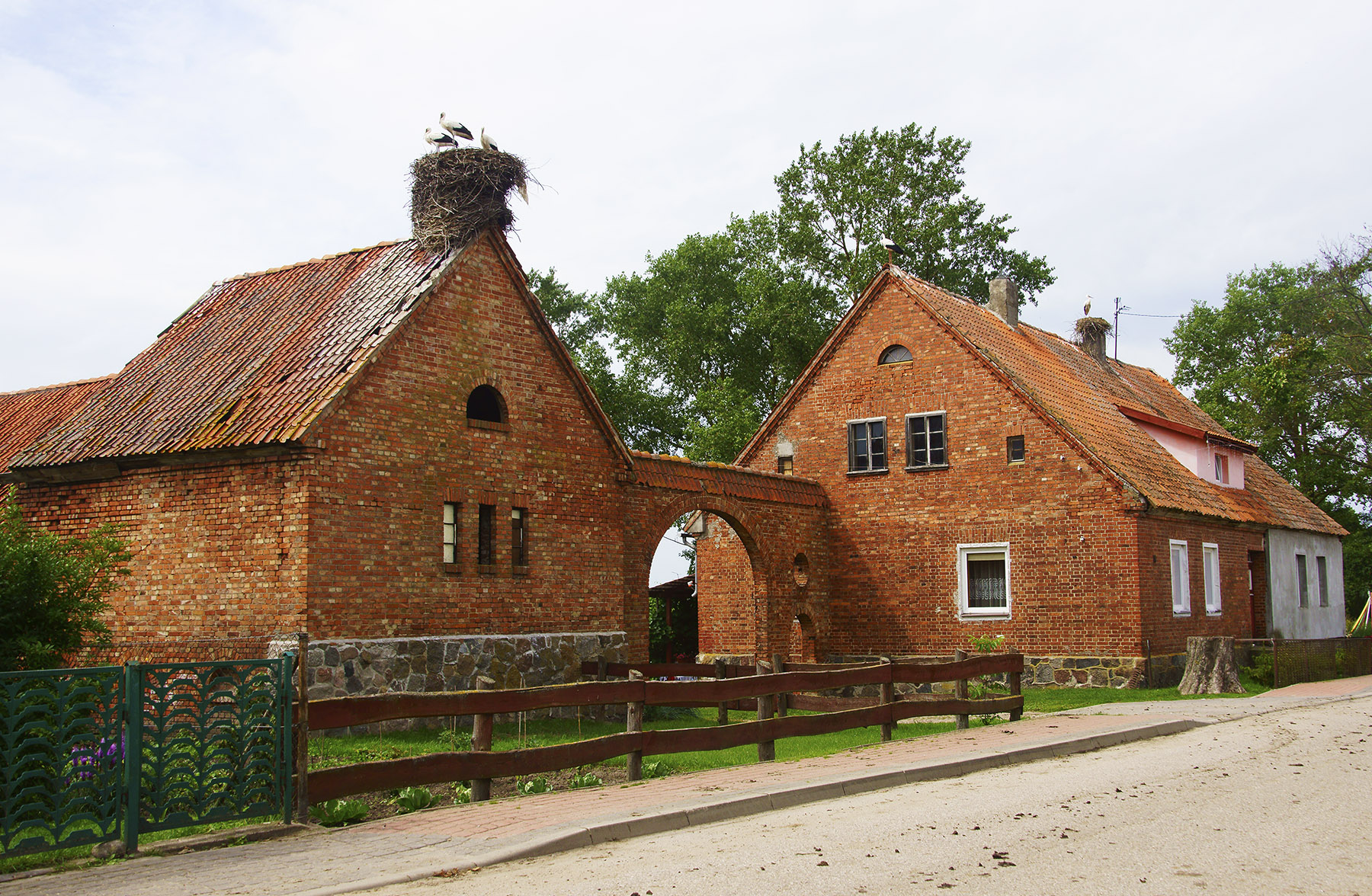 Zabrost Wielki is an unusual historical village, which in 2003 won the competition for the “Best preserved historical village in Warmia and Masuria.” The village was founded in the 16th century as a nobleman’s village with a manor house. It was built according to a complex design by the Berlin architect Karl Kujath, as part of the reconstruction after the First World War. Zabrost Wielki is a group of buildings whose architecture contains elements of the Masurian building tradition: entrance gates, boarding up of gables, stylized pazdur [roof ridge decoration pin] and wind gates. It is worth seeing in the village the cemetery from the period of World War I with beautiful old trees and historic crosses and anti-tank trenches of the so-called Koch’s line, built in 1944. 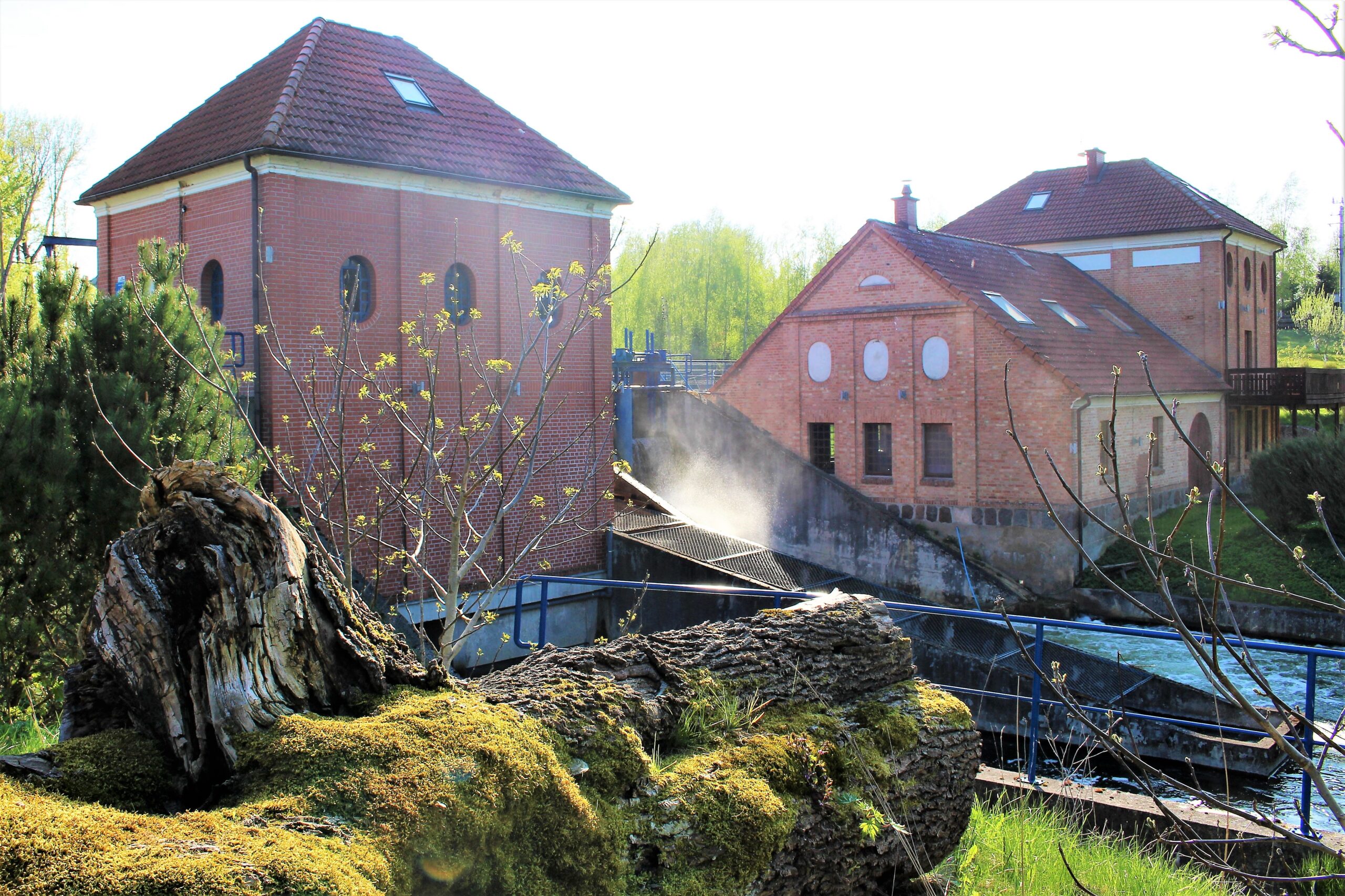 Just before World War II, Walter von Sanden came up with the idea of taming the Węgorapa and using its rushing stream. In 1939 the river in the village was dammed and a small hydroelectric power station was built on it. The waters of the Węgorapa River at the Ołownica dam are dammed up to a height of 5 metres, causing a four-kilometre long so-called backwater, thanks to which a twelve-hectare reservoir has been created – a charming ending to canoeing trips. The longest oak tree alley in Europe (5 km of oaks) on the route from Węgorzewo to Darkiejmy runs near the power plant. 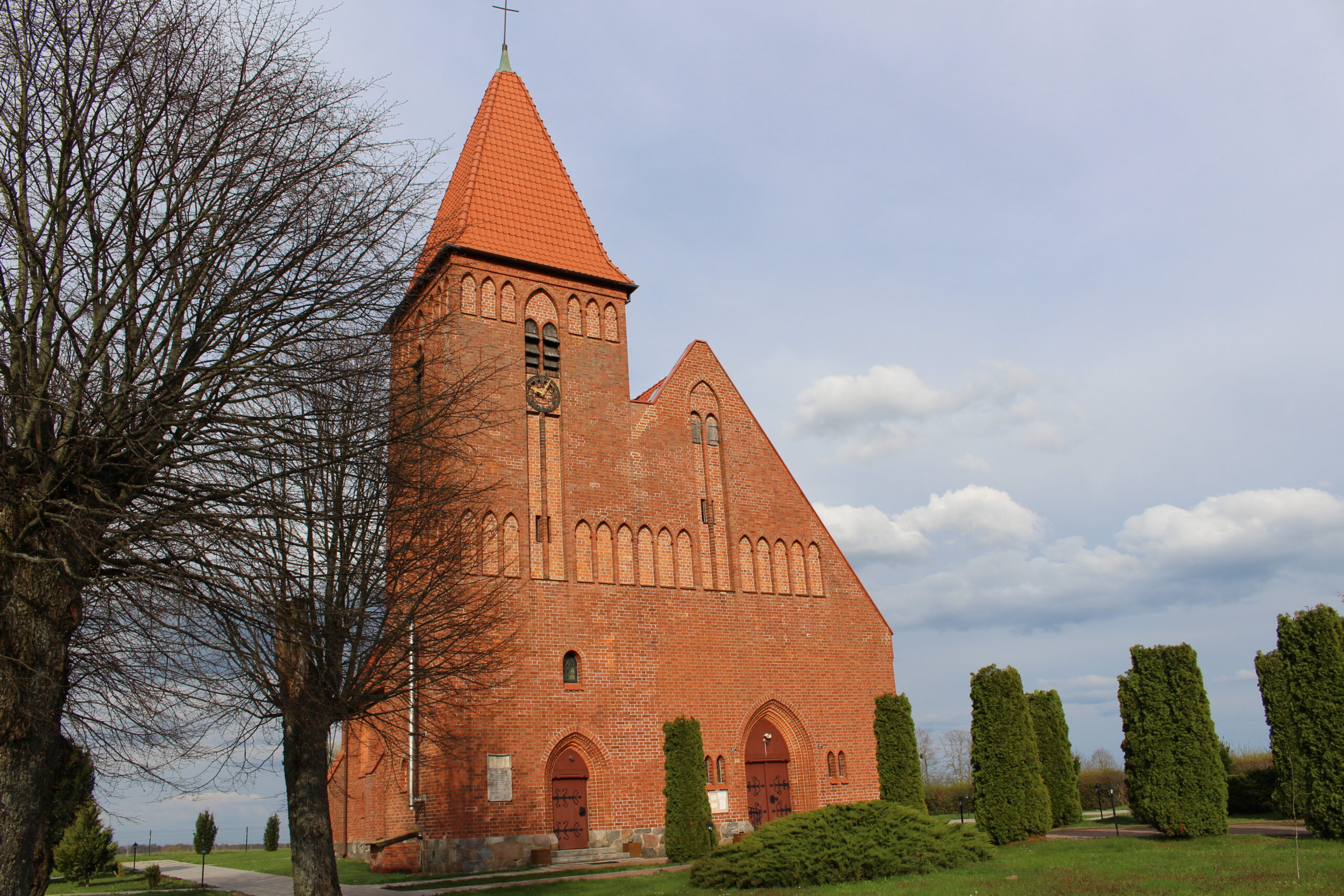 To mark the bicentenary of the coronation of the first Prussian king, Frederick I, which fell in 1901, 14 “jubilee churches” were built in East Prussia. One of them, a neo-Gothic church, designed by the Berlin architect Albert Fisch and built on a hill, reaching about 140 metres above sea level, can still be admired in Olszewo Węgorzewskie. The church boasts historical sacral equipment: organs and organs gallery from 1946 made in Konigsberg, pulpit and 17th century baroque side altar. 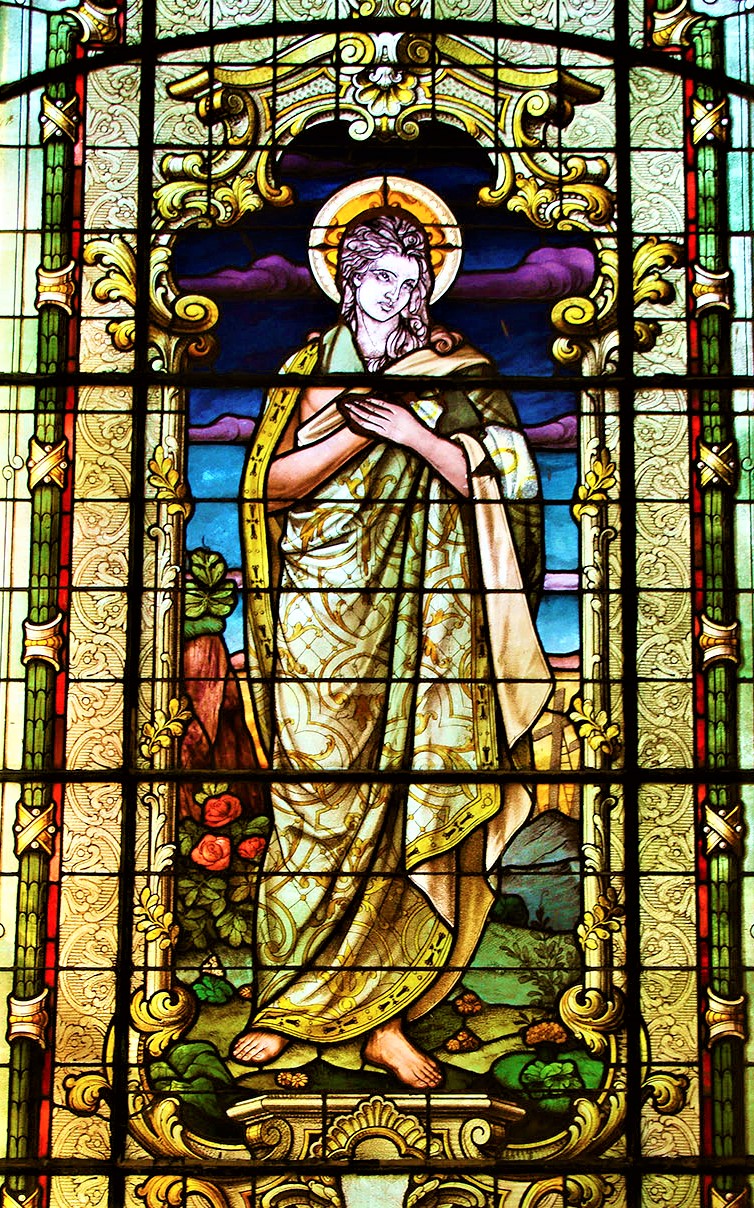 The historic brick church with a stone foundation dates back to 1732. The interior contains remarkable historic stained glass windows from 1905 and a marble slab on the burial crypt. For some time, the church’s social caretaker was a folk sculptor and painter living in Dąbrówka since 1948 folk sculptor and painter belonging to the movement called primitivism – Aleksander Słoma Słomiński.

The sandy and partly swampy part of the Skaliska Basin, formed as a result of the last Baltic glaciation, is occupied by a dense forest complex – the Skaliskie Forest (8,700 ha). The forested areas are dominated by spruce and pine forests. In the Węgorapa and Gołdap river valleys, 21 protected bird species are nesting, including 4 endangered species listed in the Polish Red Data Book of Animals: lesser spotted eagle, corncrake, crane, white-backed woodpecker. The rich forest undergrowth of unspoilt areas makes the Skaliskie Forest rich in the taste of forest specialities – berries, wild strawberries or mushrooms, while unforgettable views are provided by the rare plants found there, such as marsh Labrador tea, wild spikenard martagon lily and daphne mezereum. An extremely valuable natural area is the Minta Marsh. This former lake from the post-glacial period, located inside the Skaliskie Forest, is a major refuge for wild animals. The area, which is completely excluded from hunting, is an excellent home for them. The area of this unique site in Europe is over 100 ha. Among the most valuable species found in the Skaliskie Forest are lynx, deer, elk, otters, beavers, badgers and raccoons (Nyctereutes). Among them, a pack of wolves wields power. A unique place in the whole complex is the oldest of Masuria’s canals – the Brożajcki Canal, designed in 1726 by Jan Władysław Suchodolec. Completed in 1733, the canal connects the Węgorapa River with the Gołdap River and is about 8 km long. 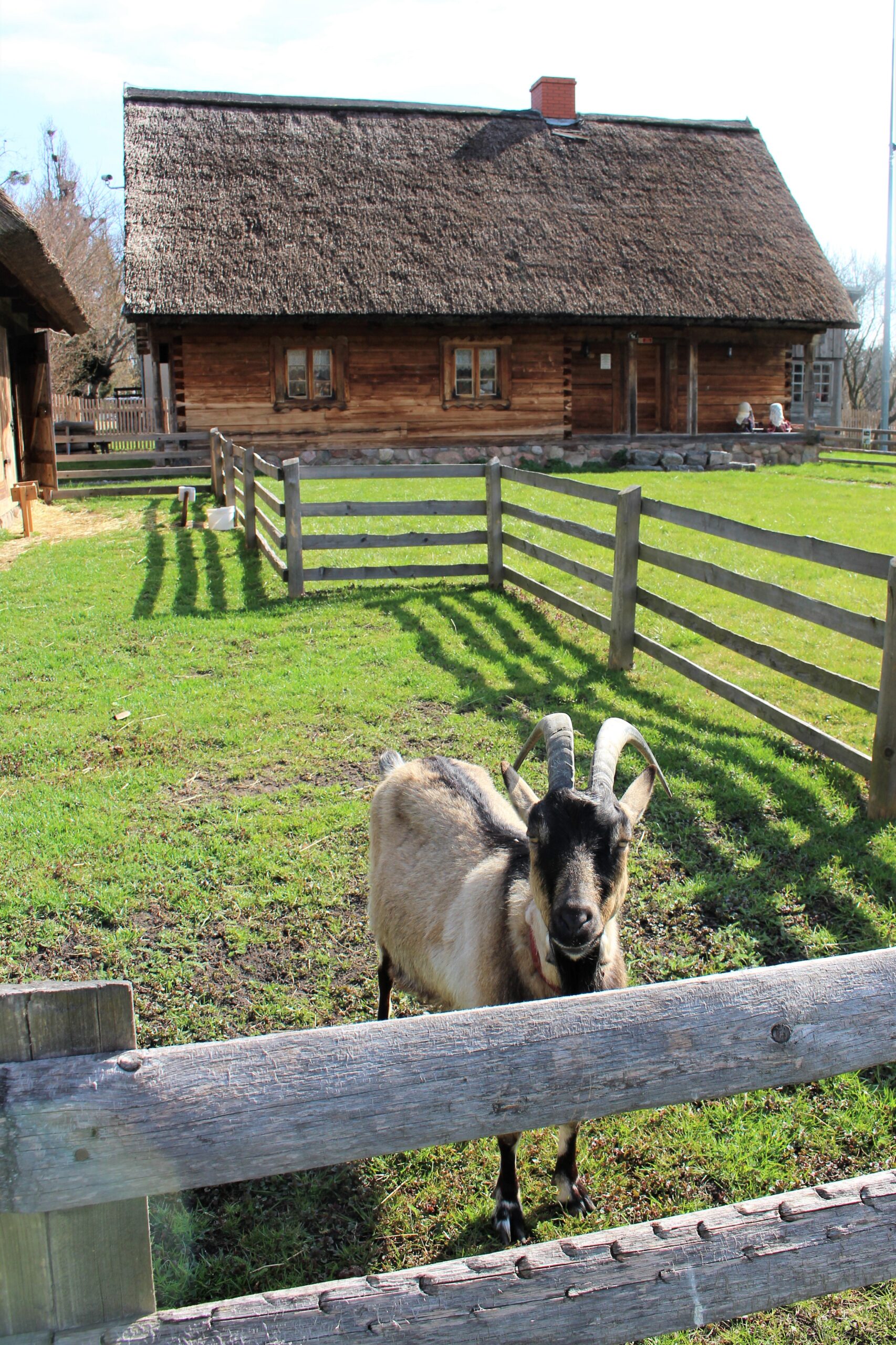 Museum of Folk Culture in Węgorzewo

The Museum is adjacent to the Ethnographic Park on the Węgorapa River, where examples of traditional Masurian architecture are exhibited – wooden cottages, a fire station from Ołownik and a wattle and daub smithy from Zabrost Wielki. You can meet mysterious Prussian stone women there. The museums include objects of everyday use, household equipment, ritual accessories and folk art from the area of Warmia and Masuria. You can also admire sculptures by Aleksander Słomiński from Dąbrówka. In addition to ethnographic monuments, the collection includes historical and archaeological items. The museum offers handicraft activities and products, museum lessons, workshops and demonstrations of traditional crafts. Folk events are held there throughout the year, including the Spring Festival and the International Folklore Fair.

The local restaurant offers regional cuisine. Kartacze [cepelinas] is the flagship dish of the region. In Banie Mazurskie you can also eat traditional Masurian ice cream, served in a small booth since 1974. 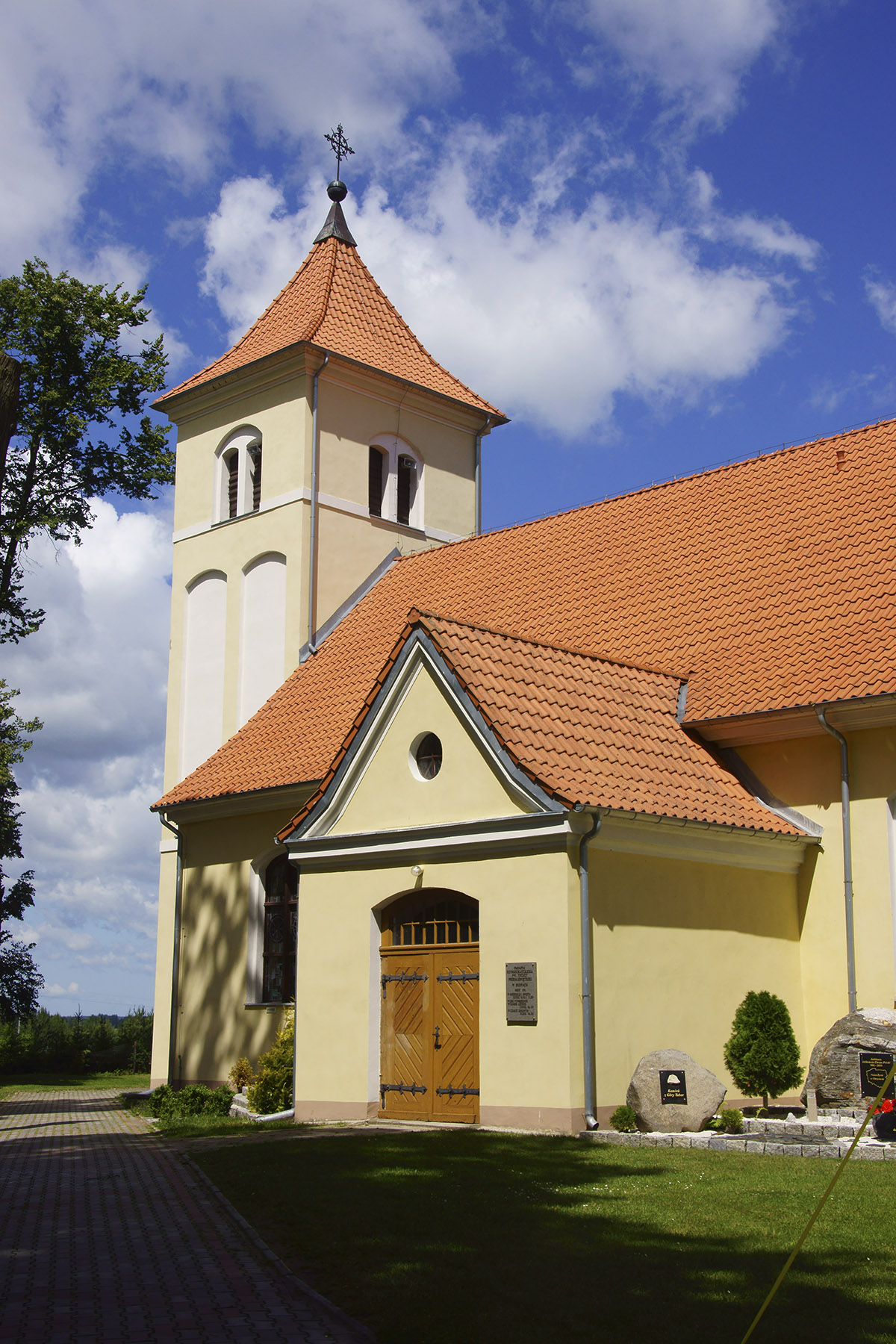 The 18th century Church in Budry

In 1724, the inhabitants of Budry asked Prussian King Wilhelm I to establish a parish and build a church. The king ordered the mayor von Waldburg to start building, but the matter dragged on for 14 years until the king, visiting the village, became angry and threatened the mayor and the chamberlain with hanging if the church was not built within a year. In 1739 the superintendent of Węgorzewo, and a famous botanist at the same time, Georg Andreas Helwing, consecrated a new church. A large cast iron cross on the grave of Pastor Matchias Czygan has been preserved in the churchyard cemetery. An unusual curiosity is the butterfly reproduced on the reverse of the grave cross. A former Evangelical cemetery is situated next to the municipal cemetery in Budry. It is worth visiting this place to find historic, pre-war gravestones among the mighty, ancient oaks. 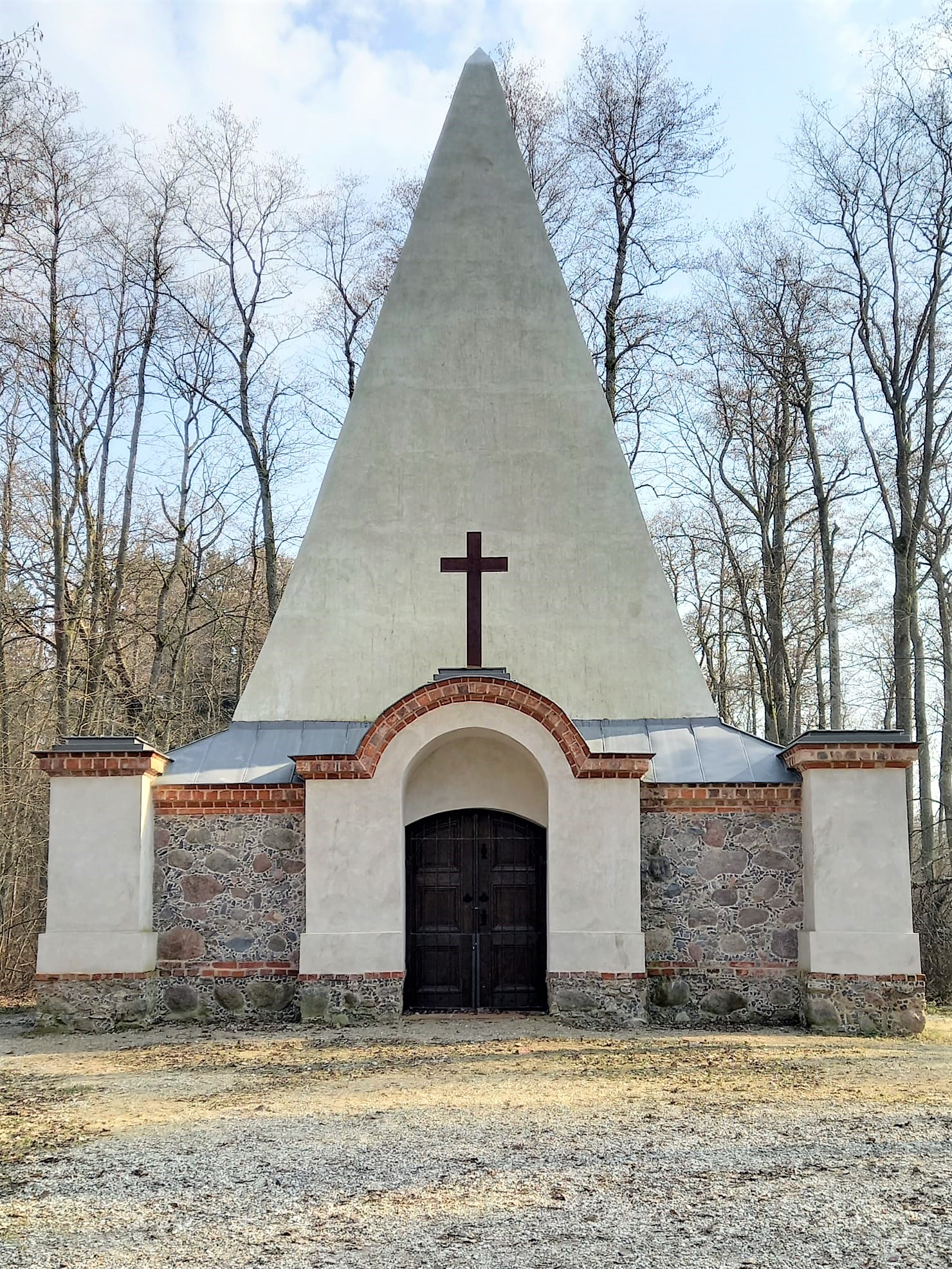 The pyramid in Rapa

The family house of the Prussian Barons von Fahrenheid was built in 1811. A characteristic feature of the building is its shape, reminiscent of the ancient pyramids. The structure has an inner vault inclined at 51°52’ – identical to that of the Egyptian pyramids. The foundation is built of fieldstone, on a square plan with external dimensions -height: 15.9 m, length of foundation side: 10,4 m. Over the years, seven family members have been buried in the tomb. Long forgotten, the building began to deteriorate. In 2018, the pyramid was restored to its former glory thanks to the efforts of Nadleśnictwo Czerwony Dwór [the Red Manor Forestry District], on whose grounds the chapel is located. 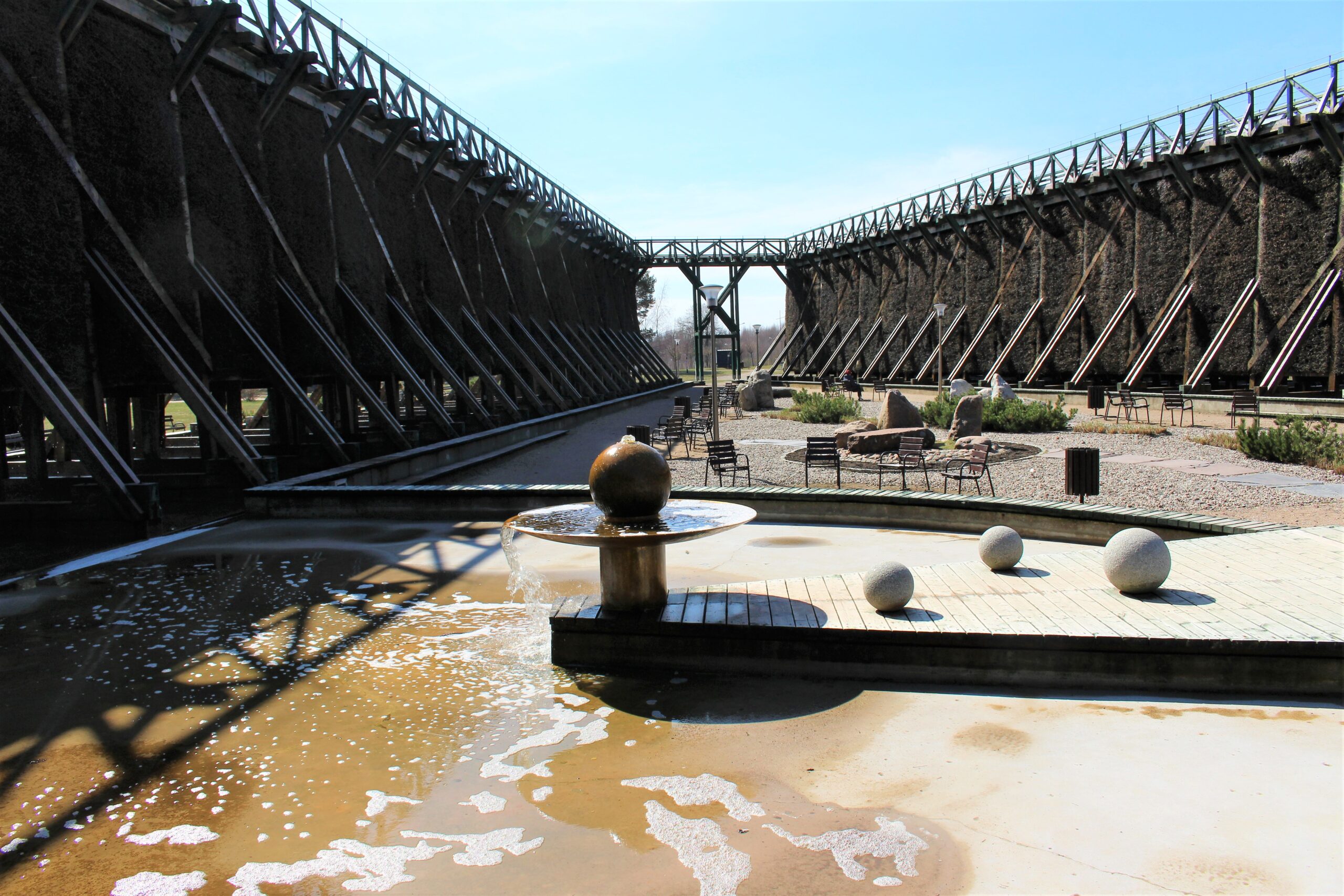 Since 2000 Gołdap has been a health resort town with therapeutic mud and climate profile. There is a sanatorium, a pump room and graduation towers, as well as a modern spa infrastructure with the Spa Promenade, which is worth visiting for its hectare playground, mini-golf holes, walking and cycling paths and outdoor gyms by the lake and in the centre. The graduation towers cure the upper respiratory tract, hypertension, sinuses, emphysema, allergies, vegetative neurosis, stress, depression and exhaustion. Inhalations used prophylactically have a bactericidal effect on the immune system.

There are two ski lifts in the Piękna Góra Inn (272 m above sea level). In the summer, a big attraction is a chairlift which takes visitors to the only cafe in the region with a revolving floor, where within an hour, making a full circle, you can admire the panorama of the postglacial land of Gołdap and the extraordinary Romincka Forest. There is also a bowling centre and a rope park with interesting routes for both children and adults. The local restaurant serves excellent regional cuisine and venison. 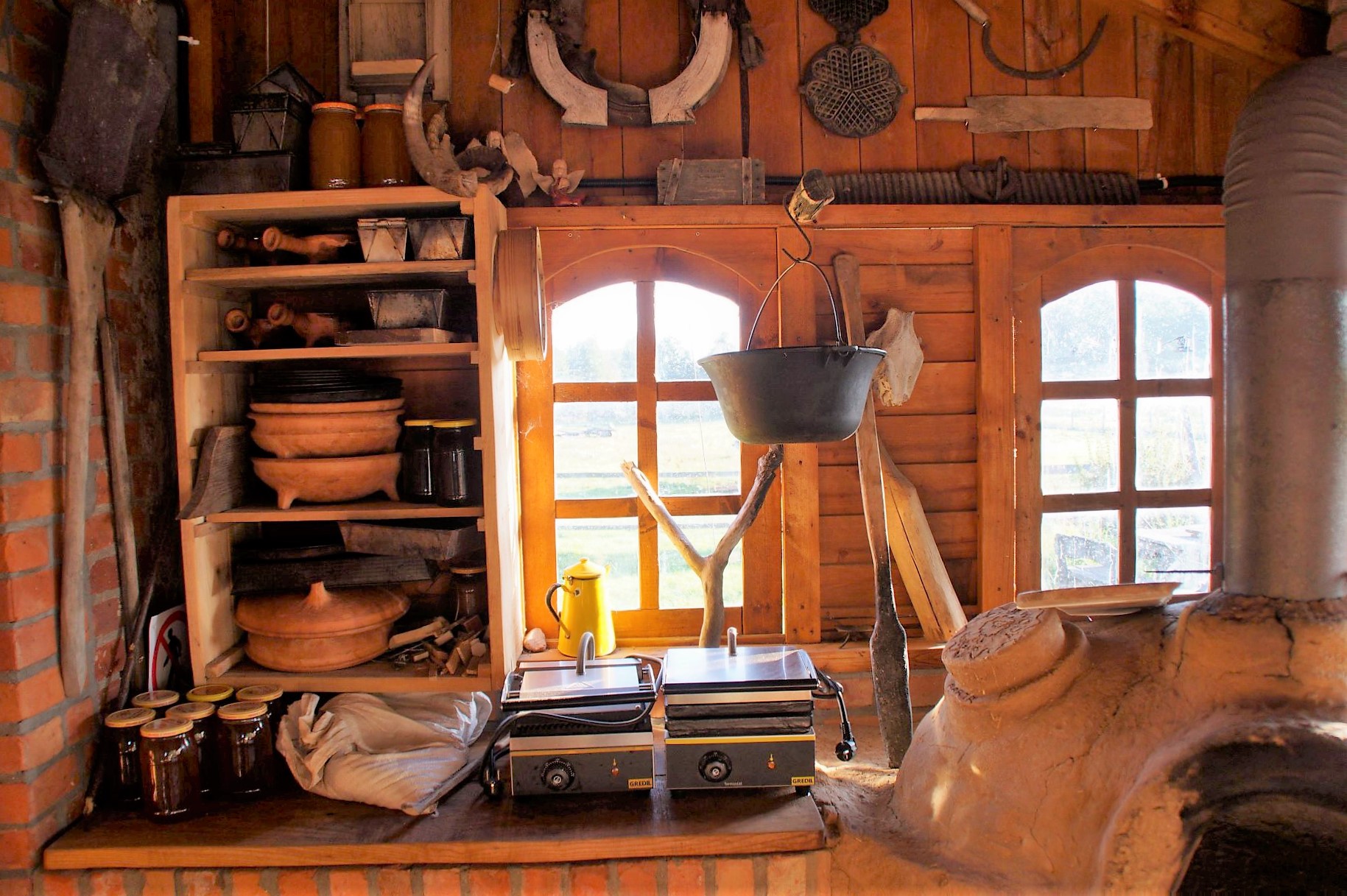 The Masurian Eco-Garden “Ciche Wody” organises family workshops in bread baking, felting or growing and caring for vegetables. The owners grow organic grains, vegetables, legumes and herbs. They also breed skudde sheep. When visiting the farm, you can enjoy the local milk, cheese, eggs, beef and lamb. The top quality of the products on offer is defined by the regularly renewed organic farming certificate of conformity. 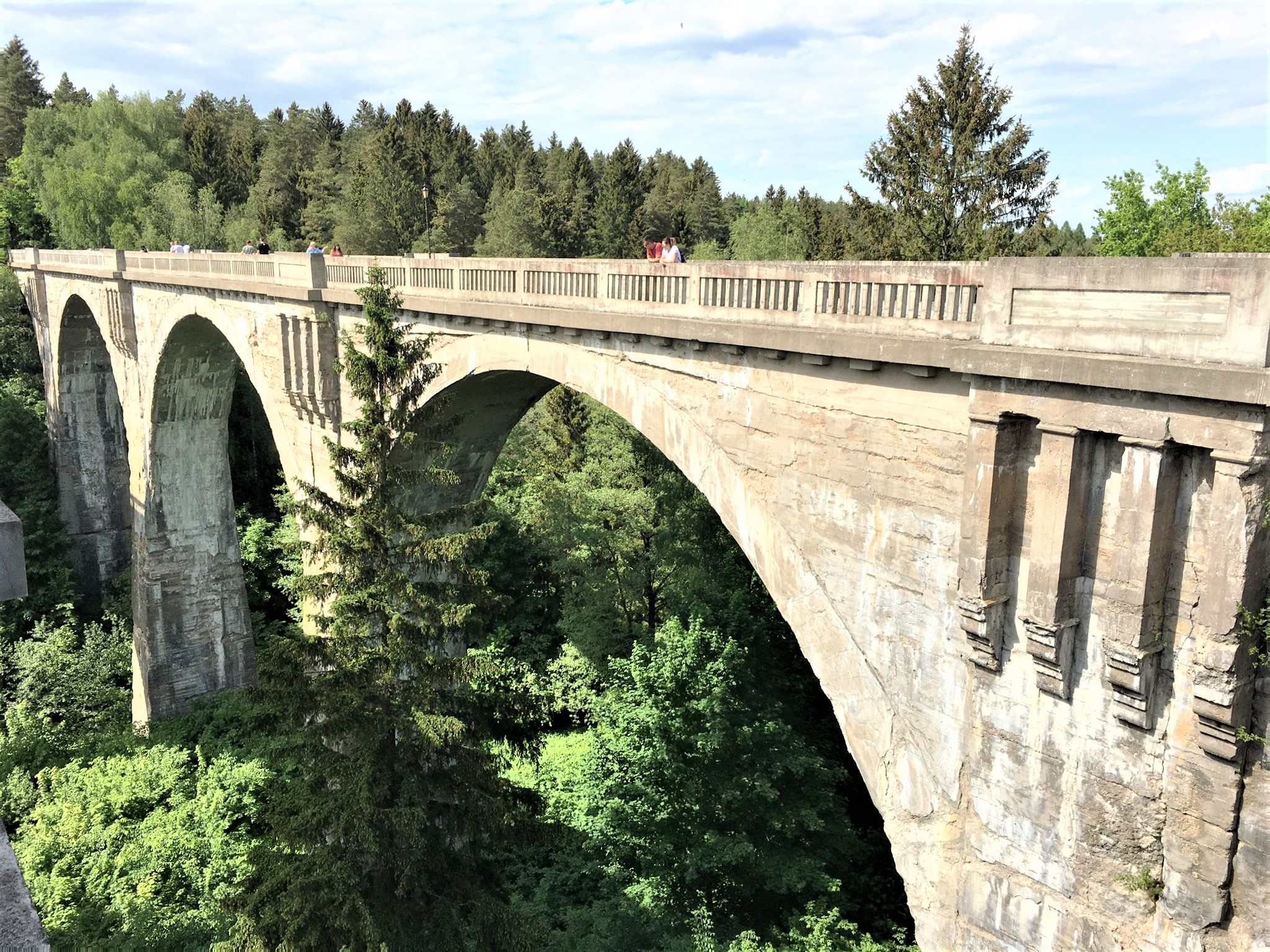 Two huge viaducts from the years 1917-1918 of the disused railway line Gołdap – Żytkiejmy are among the highest in Poland. The construction used a 5-span structure with equal 15 metre high arches, with a length of 180 and a height of up to 36.5 metres. A riverBłędzianka flows under the structures. The architecture is characterised by perfect proportions and the pillars are decorated with elements inspired by the Roman aqueducts at Pont du Gard. Nearby, there is a 20 m highobservation tower with a viewing terrace at the level of 15 m. It offers a view of the Dobellus Duży and Mały extrusion lakes, the historic railway bridges in Stańczyki, and the postglacial valley of Błędzianka. The Green Velo cycling route runs directly by the tower.

The place cultivates its culinary heritage, offering delicious specialities of the borderland cuisine. There you can taste many delicacies, including kartacze, babka and kiszka ziemniaczana [potato dishes], as well as local sweets such as mrowisko [anthill], while the most important bakery product of the area is the unforgettable taste of sękacz [tree cake] baked on a real fire. 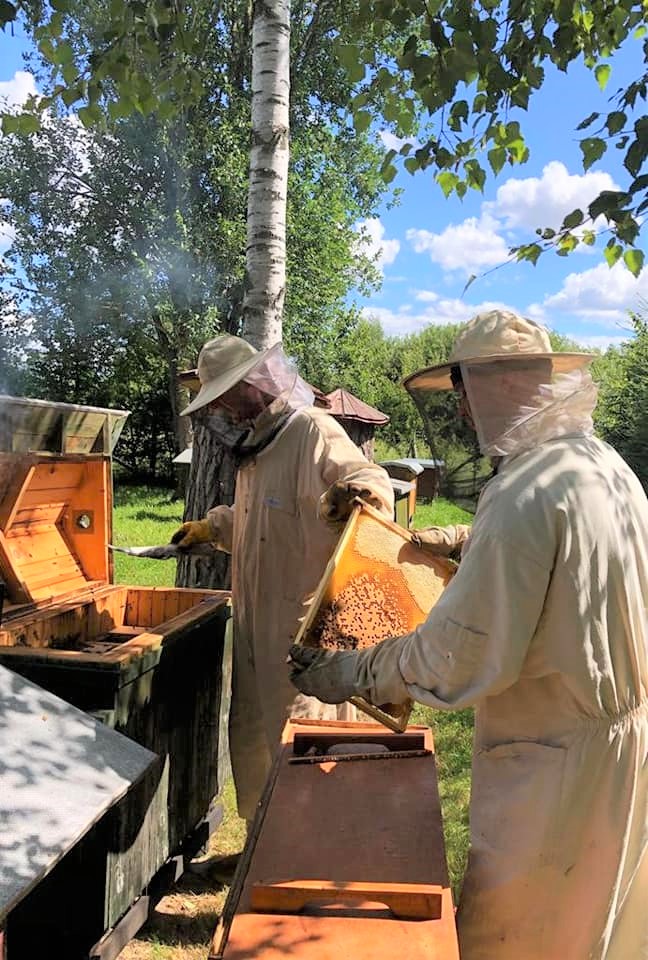 The apiary was created out of love for nature. It offers a wide range of beekeeping products, and apart from many kinds of honey, you can also find herbal honey or propolis ointment there. The farm runs family educational workshops and offers an apitherapy house where you can undergo a healing process or take preventive care of your health. Insomnia, joint disease, respiratory disease and even heart disease can be treated with this method. Beetherapy is also helpful in the case of chronic fatigue syndrome, so it is a good idea to go there to rebuild your vitality and reduce stress.

When in Masuria, fresh fish caught from clean lakes is a must-try. The local smokehouse in Grądy Węgorzewskie offers a wide selection of these, including excellent vendace, whitefish, sturgeon, catfish, pikeperch and the gourmet sought-after excellent eel.

The Ściborska Republic is the perfect place for families, health and adventure. Situated in the Wilderness of Masuria, the “Running Wolf” Ecological Settlement is not only the largest sled dog breeding farm in the region, but also a museum of Indian and Inuit culture, a Museum of the Forest Movement, the Maria Rodziewiczówna Museum and an open-air museum of trapper cabins. Republic offers natural dog therapy, field trips and family survival adventure camps based on the principles of living in harmony with nature. 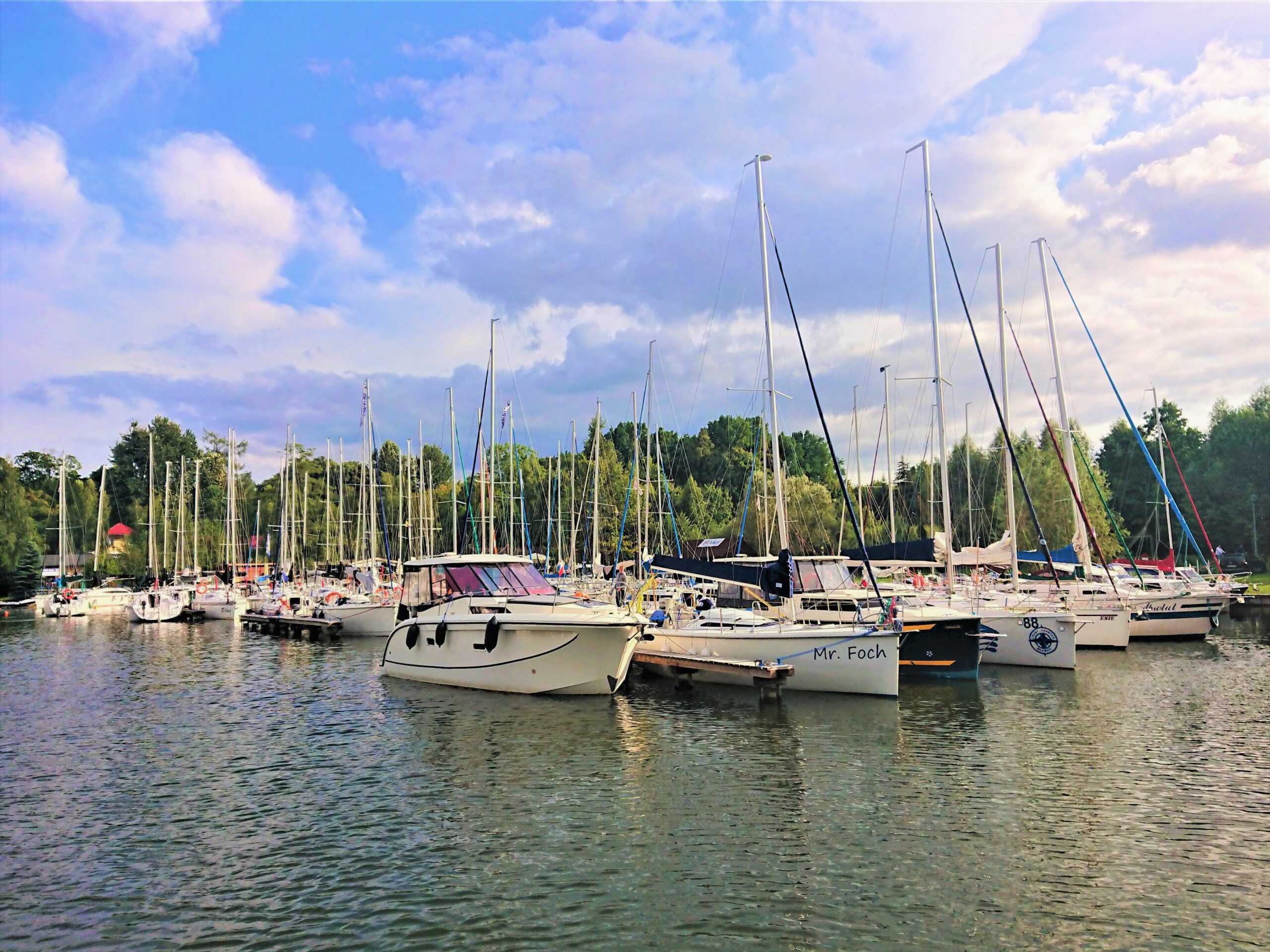 The marina in Węgorzewo in Masuria is located near the fork of the picturesque Węgorzewski Canal and the Węgorapa River. A nature-rich two-kilometre trail leads to Mamry Lake. Its excellent location at the northern end of the Great Masurian Lakes trail makes the Węgorzewo marina a choice for the start of a sailing adventure on a magical waterway.